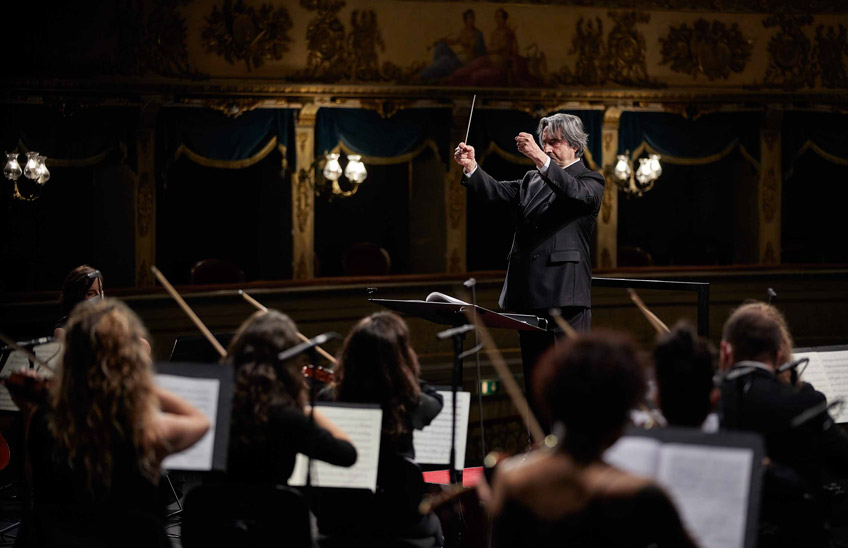 the concert is made possible by the collaboration between Ravenna Festival, Fondazione Orchestra Giovanile Luigi Cherubini, and RMMUSIC

On- and in-ear headphones offers a better experience of the immersive audio recreating the unique acoustic of the Alighieri Theatre, one of the only eight places in the world (and the only theatre in Italy) to which the cutting-edge d&b Soundscape En-space system has been applied.

There is a subtle link, invisible to most but strong and unequivocal, connecting the symphonic works of 19th-century Italy to the glorious and most ancient musical history of this country. In the century of the Romantic outburst and “absolute” music, that bond seems to be severed, but in the homeland of Monteverdi and Corelli, Scarlatti and Pergolesi, and also Jommelli, Paisiello, and Cimarosa – undisputed masters of the Europe of music throughout the 18th century and beyond – their lesson runs deeper, subterranean, hidden by the omnipresent magnificence of the voice in the opera theatre but still alive and beating.
Indeed, the newfound interest for instrumental music which will resurface among the Italians in the 20th century can be described as the outcome of an uninterrupted tradition, expressed in the works of those composers who, renouncing to the fame which only the theatre could grant, chose to close the gap with the European developments. Giuseppe Martucci is an emblematic case; his elegiac and melancholic Notturno, conceived for the piano then transcribed for the orchestra in 1901, is one of his most famous works.
But that never-forgotten tradition is also expressed within the opera repertoire, in the symphonies as intermezzos or ballabili, which soon become true concert pieces. And even if the dreamy Preludio sinfonico Puccini composed in 1882, as a student’s essay at the conservatoire of Milan, was created as an independent work, it suggests the attention for the developments of the European style, the Wagnerian taste in this case, and the orchestral mastery which will characterize all his works for the stage. Likewise, the craft Verdi pours not only into the vocal pages but also into the instrumental parts, which sum up and anticipate the dramatic core of the operas, feels international – or, better, universal. Such are symphonies like the one, solemn and excited, which opens Nabucco (1842) disclosing its extraordinary melodic treasure chest, or the one opening I vespri siciliani, or Les vêspres siciliennes, grand-opéra created for Paris in 1855. The audience in the French capital town is also the recipient of the ballabili with which the composer, ten years later, enriches his second version of his Macbeth: dance music which is not conventional but wild and diabolical like the witches it epitomizes.